Sierra On-Line: the poor treatment of a legacy

Advance warning: this article is not about anime. Oh well it’s my blog and I can go off-topic if I want to.

So let’s talk about a certain classic developer of computer adventure games known as Sierra On-Line. Or rather, let’s talk about the rather shameful treatment of their back catalogue of games.

As a starting point, let’s look at the recently released Humble Sierra Bundle. Screenshots attached in case you’re reading this article in the future and need a reference. 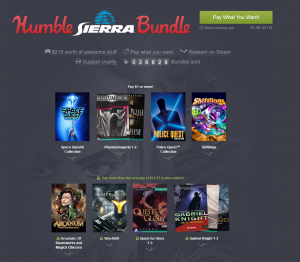 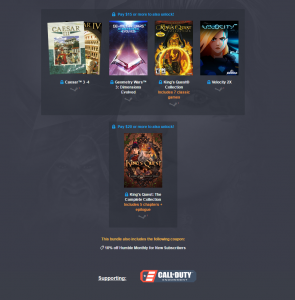 So yeah, as you can probably tell we’ve got several of Sierra’s more popular classic game series, as well as a few random titles from the 2000s-era Vivendi-owned Sierra, and several of the recent titles that Activision has released under a revived Sierra brand. Now I’m not saying there’s anything necessarily wrong with this sort of mix, but let’s be honest, if I say “Sierra” to an oldschool PC gamer are they really going to think of TimeShift?

Anyway, let’s look in more detail at what you get. You do get the new episodic King’s Quest game by The Odd Gentlemen at the top $20 point… by most accounts a decent game, the bits I’ve played of the first episode certainly seem promising, but let’s look more at the classic offerings on here.

King’s Quest (but missing 8), Space Quest, Quest for Glory, Gabriel Knight, Police Quest, Phantasmagoria. Well, to be honest I can think of a few omissions, but that is a fair chunk of the classics. Interesting to note that even though they’re old DOS games they’re all only available as Steam keys. Because apparently it’s really important to have DRM on something that was sold on floppy discs in the 90s using the elaborate copy protection method of “looking words up in the manual”. But anyway, the real question becomes “what do we get on Steam”, so let’s have a look. 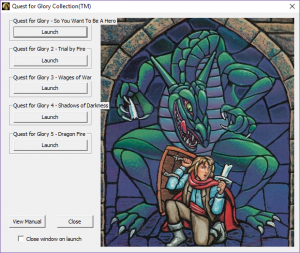 So, as a bit of backstory, in around 2006 Sierra (in its Vivendi-owned incarnation) put out a few cheaply packaged compilations of some of its classic titles, including King’s Quests 1 through 7, Space Quests 1 through 6, and Leisure Suits Larry 1 through 6. These compilations were basically just the original DOS versions of the games packaged up in a fairly clunky launcher with what is now a rather dated version of DOSBox. At the time they were widely panned for being incomplete (missing different versions of the games and with fairly patchy manuals) and fairly cheaply put together, especially compared to the collections that Sierra had put together in the 90s. A few years later, Activision, after buying out Sierra and divesting itself of in-progress games it didn’t like such as Leisure Suit Larry Box Office Bust (a good call on Activision’s part) and Double Fine’s Brutal Legend (not quite such a good call on Activision’s part), threw the King’s Quest and Space Quest collections up on Steam. Still with the fairly clunky launcher and even then quite dated version of DOSBox. Eventually, however, the games also found their way to GOG.com, who did their own in-house packaging up in DOSBox and released their own versions.

But recently, Activision seems to have remembered this particular chunk of back catalogue that they own, and they’ve brought a few more classic Sierra games to Steam and updated the King’s Quest and Space Quest collections. So what’ve we got now?

Well, King’s Quest and Space Quest still have the same clunky launchers and fairly sparse selection of manuals (which proves a particular problem for Space Quest 6 as the included manual doesn’t have the necessary hints for the infamous datacorder puzzle), but the games themselves have essentially been replaced with the GOG versions, which at least makes them playable on modern PCs (the previous releases used the Windows version of KQ7 which did not run on modern Windows versions at all). And for the other games that hadn’t previously made it into a collection, they repurposed the launchers for the new games, which is where we get that lovely screenshot included above from. Apparently writing an actual new launcher after 10 years was too much to ask.

So yes, the games work, even if you might have to ferret around on the internet for the manuals you need to solve the puzzles, but to be honest these are some fairly cheap-feeling releases.

Are some of my complaints petty? Maybe, but seriously these games are genuine classics. In the early 90s they topped the best-selling PC game charts. Quest for Glory 4 was narrated by John Rhys-Davies! Gabriel Knight was played by Tim freaking Curry! For a comparison, look at the Lucasarts rereleases… HD remakes that let you switch back to the original at the press of a button, with bonus content and concept art and whatnot. That’s the kind of thing these games deserve.

I’ll be fair, if you don’t have these games the Humble Bundle is a decent way to get them, and they do work (although I seriously recommend hunting down PDFs of the original manuals, and maybe tweaking the sound settings if you can figure out how). But if you’ve still got your original CDs lying around (or hey how about the original floppy discs) and you have a modicum of technical knowledge you’re maybe better off running those in DOSBox or ScummVM yourself. So yeah they work, but it’s just with games of this level of historical importance it’d be nice to see a really special rerelease.

I was going to cover some other classic Sierra game related topics (the games that didn’t make it into this bundle, some of the “interesting” stories behind some of the recent remakes that some of the games have merited) but I think I’ll save those for a future article.

I’ll end on pointing out that the humble bundle benefits a Call of Duty charity. why is there a call of duty charity activision what is this world you have created

← Some expensive Macross blu-rays
An unboxing of SoniComi: Communication With Sonico →