I’ve kinda neglected this site. Is this due to laziness? No, because I don’t owe you anything, this is a hobby. But anyway, here’s some content, because over the holidays a certain long-awaited item has arrived: Animeigo’s release of the original 1980s Bubblegum Crisis on blu-ray. Immortalised in slightly better photographic quality than my usual posts, due to my ability to borrow an actual camera for a change. As you can no doubt see, this is a somewhat involved release, with various bits and bobs and doodads and whatnot, of varying utility

Let’s start with the actual important bit though! 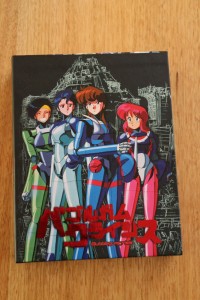 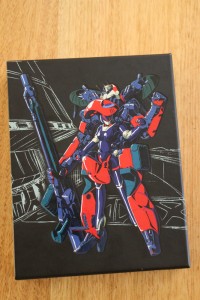 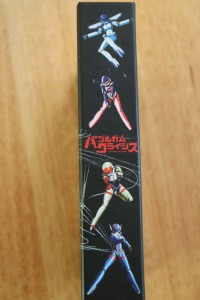 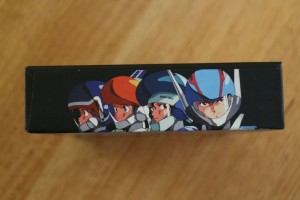 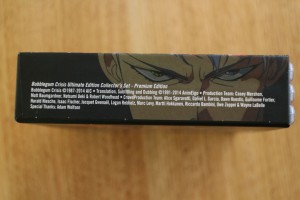 The box, as seen above from various angles, is pretty cool. It’s got shiny bits and whatnot. Interestingly, the Japanese blu-ray set used newly drawn cover art, but none of it made it onto this release (whether this was due to preference or the confusing world that is anime licensing is unknown to me), so Animeigo is continuing to repurpose the same key art that’s been seen many times before. I think the picture of the Knight Sabers on the cover was used on Madman’s “10th Anniversary” release. But hey, shiny things! And anyway the new art is weird and off-model, so it’s probably a good thing it isn’t used here. I like the use of the original Japanese logo, makes it look classy.

Other interesting thing is the lack of the usual blurb or tech spec type info. This is because fancy pants limited kickstarter edition rather than a thing that goes on shelves, I guess.

Inside the box, we have discs! 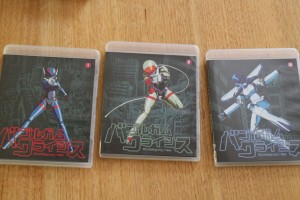 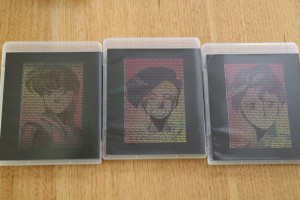 The cases continue to be classy, with this cool thing where all the premium backers get their names in tiny print on the back. My name is there, but I have no idea if you can make it out in this size image. Trust me, it’s there. As is the name of my friend Evan, who posts as MostStrange over at The Action Points Podcast, an awesome site/podcast who I am blatantly plugging in order to ingratiate myself to them and hopefully snag another podcast guest spot or something. Huzzah I am totally not shameless.

Inside the cases, we see discs and reversible covers. 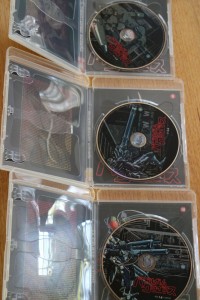 So far I’ve only watched Disc 1. It’s pretty good, with decent subtitles and great video quality and whatnot. There’s also this great feature every time you start the disc up! 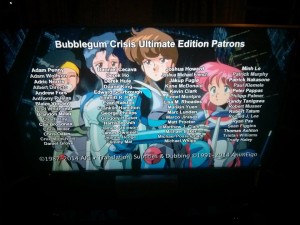 Look closely and you will see that I have once again forced people to look at my name, because Kickstarter allows me to be an egomaniac.

As for the actual show, I’ll just say “Blade Runner 80s Jpop” to try and get you all intrigued while telling you nothing.

Anyway, it’s not just the discs that I got. Because there’s also stuff! 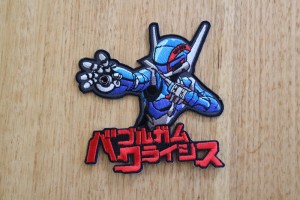 Stuff number 1: a patch which I will probably never use because I never know where to put these. Seriously what kind of clothing item should I be putting patches on. I know nothing of fashion

Stuff number 2: A rad AD Police keyring which I may well use, since my rad Princess Jellyfish keyring is starting to get worn out and I’m not sure if I want to use the Panda-Mode Ranma’s Dad keyring because Ranma is not a good enough show to deserve such an honour. 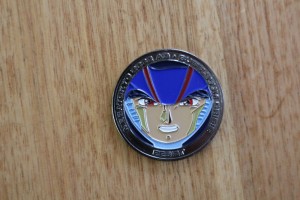 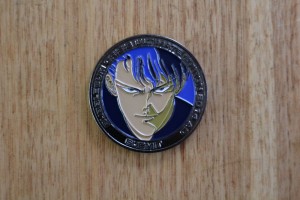 Stuff number 3: the infamous Challenge Coin. I don’t know what a Challenge Coin is or what it’s used for. Nor, as far as I can tell, does anyone else. 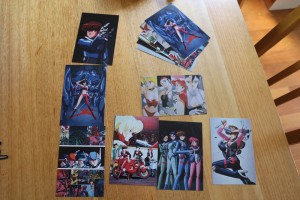 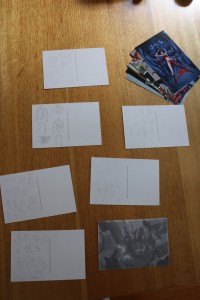 Stuff number 4 through to lots: Postcards! Containing yet more classic examples of key art from the show. There is yet more that wasn’t used on this release, we had to vote on which ones we wanted made into postcards. I got two sets of postcards plus one bonus postcard on account of being a “spent too much money” person. The backs of the postcards mostly have lineart, but one has the names of EVERY SINGLE BACKER in tiny tiny print. Somewhere there is the name of my awesome friend Star, who is responsible for the rad lyrical parody in my Ryuko figma review. I am all about the shoutouts today.

I think that’s basically everything. Yay kickstarter stuff. I think you can still get it at the website if you are so inclined.

← Patema Inverted: as released by Hanabee
The magic of Christmas and Crowdfunding: Santa Company →

2 comments for “An 80s throwback, revived: Bubblegum Crisis on Blu-ray”