Yes, I’m enjoying the Time of EVE very much, thank you! 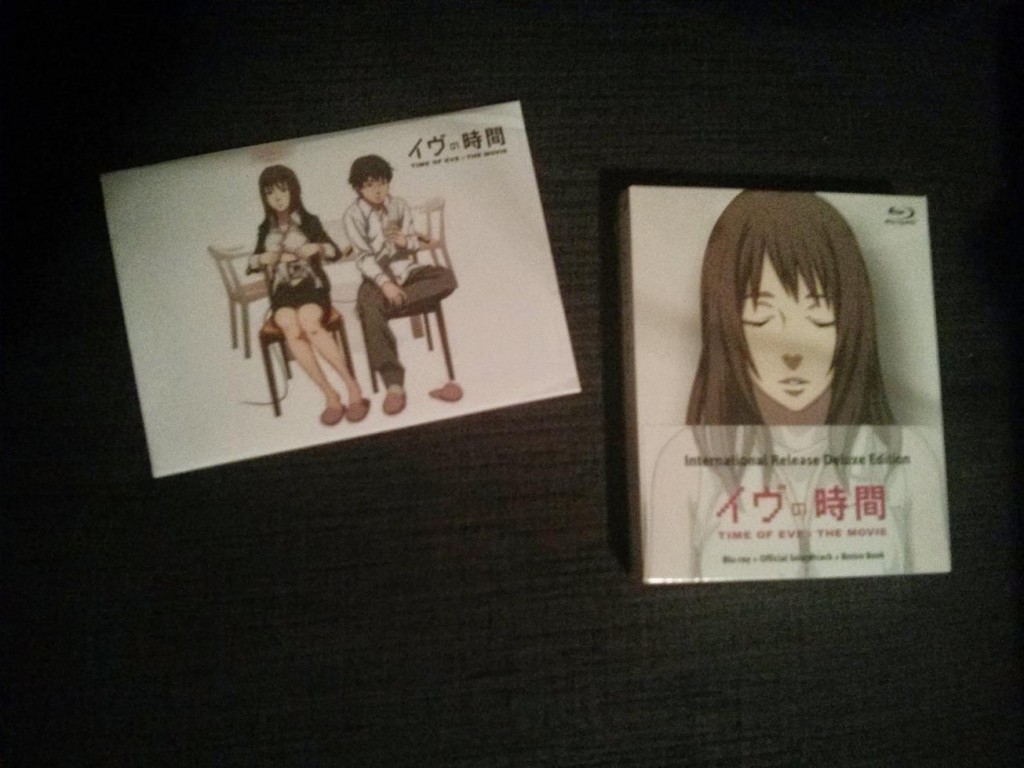 Finally, after many moons of waiting, Kickstarter has paid off, and I’ve obtained a fairly fancy English-language blu-ray of Time of Eve: The Movie.

This movie was originally made as a series of ONAs that were on Crunchyroll yeeeeears ago (this was when Crunchyroll was barely even a thing, like they’d only just begun to go legit). I remember avidly following them back then, and I really really enjoyed them. I’d already got the Blu-Ray release of the ONAs (Right Stuf had it as an import) but I was super excited to be able to get the movie that’s all edited together with extra footage. So getting it in a fancy box with a dub was a bonus!

The film is basically about the societal implications of androids and a cafe. It takes a lot of influence from western sci-fi writers, in particular Isaac Asimov (direct quotes from the Three Laws etc).

Seriously this is well worth checking out. I’m looking forward to seeing the movie version (as well as the english dub which is apparently good and not bad).

Anyway, let’s check this baby out. 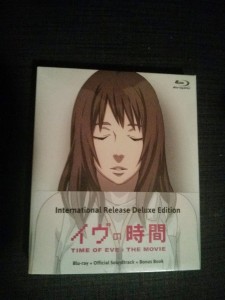 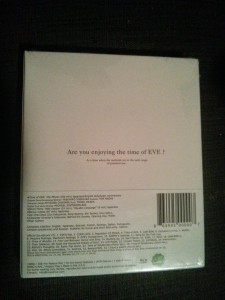 So yeah it comes shrinkwrapped with an extra flap of paper showing the title and all the details. Note that there’s a cute little “funded with Kickstarter” badge on the back… they actually had us vote on whether we wanted it on the back or the front. If you can read the back you’ll notice that there are a ton of extras here.

Take the flap off and you see this. 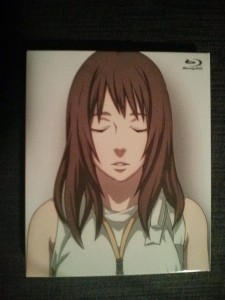 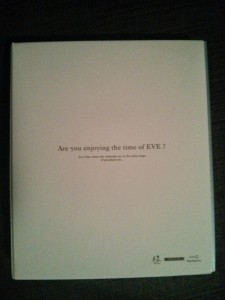 The underlying art is all nice and minimalist and classy.

Open it all up and look at the contents! 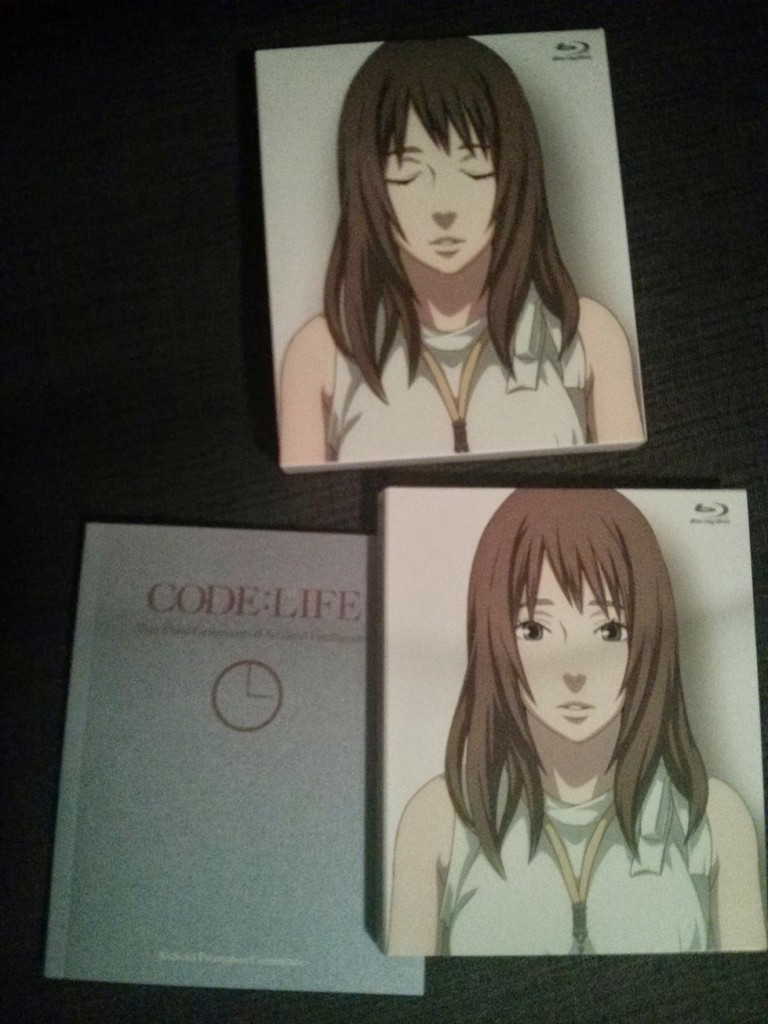 So inside the slipcase we’ve got the discs themselves as well as the booklet. 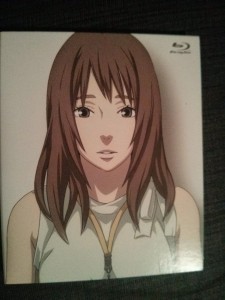 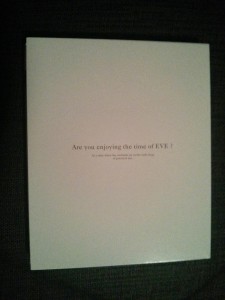 The disc case itself has this cool sort of contrast with the outer slipcase where Sammy’s eyes are open on the inside and closed on the outside (god I hope I am remembering character names right, pretty sure that’s Sammy). If I recall from Kickstarter updates they deliberately went with the minimalist look since they didn’t have to worry about how it looked on store shelves. That’s cool, I feel too many packages are designed purely for catching people’s eye in stores, when they spend the majority of their life on the shelves of a collector. 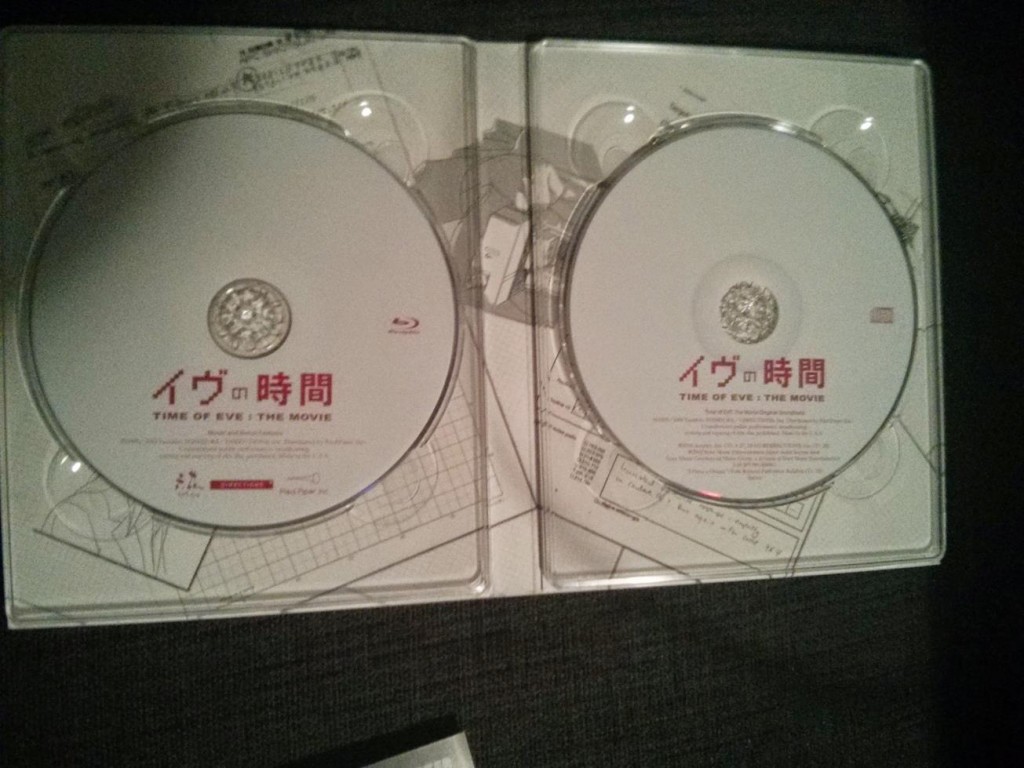 Inside the case we’ve got the Blu-Ray and the Soundtrack CD. That’s right kids, before iTunes, music used to come on these things called “CDs”, which are discs like what xbone games come on except they only hold 640MB 😉

Also inside the case we have these! 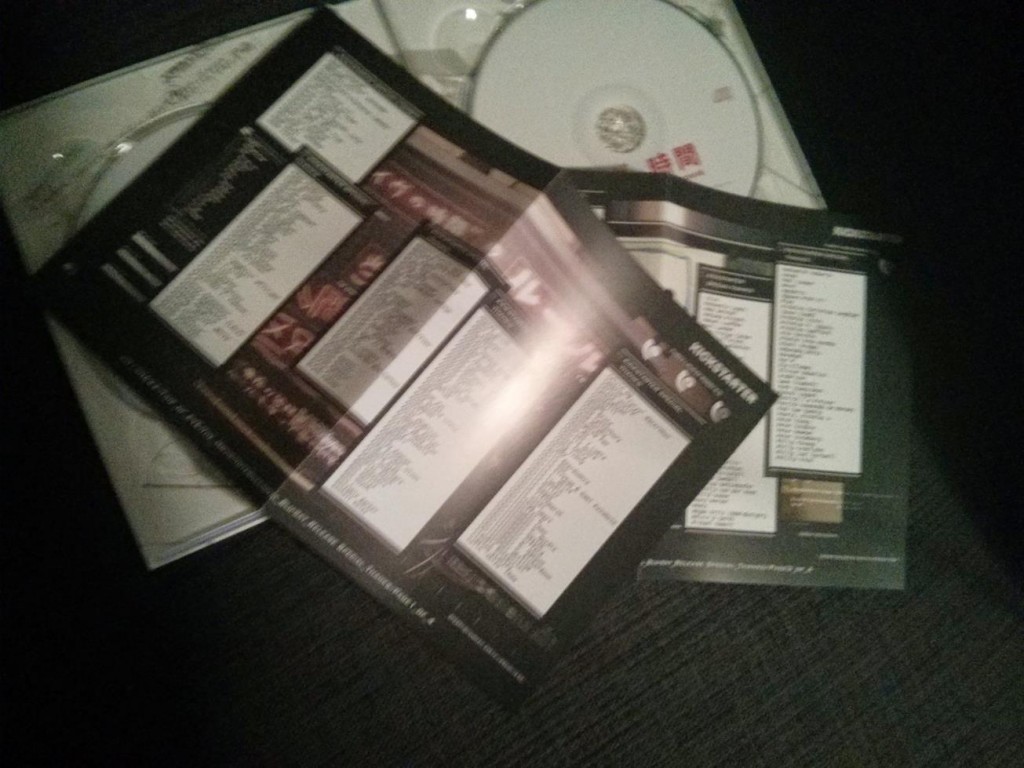 The most important part of this whole package: 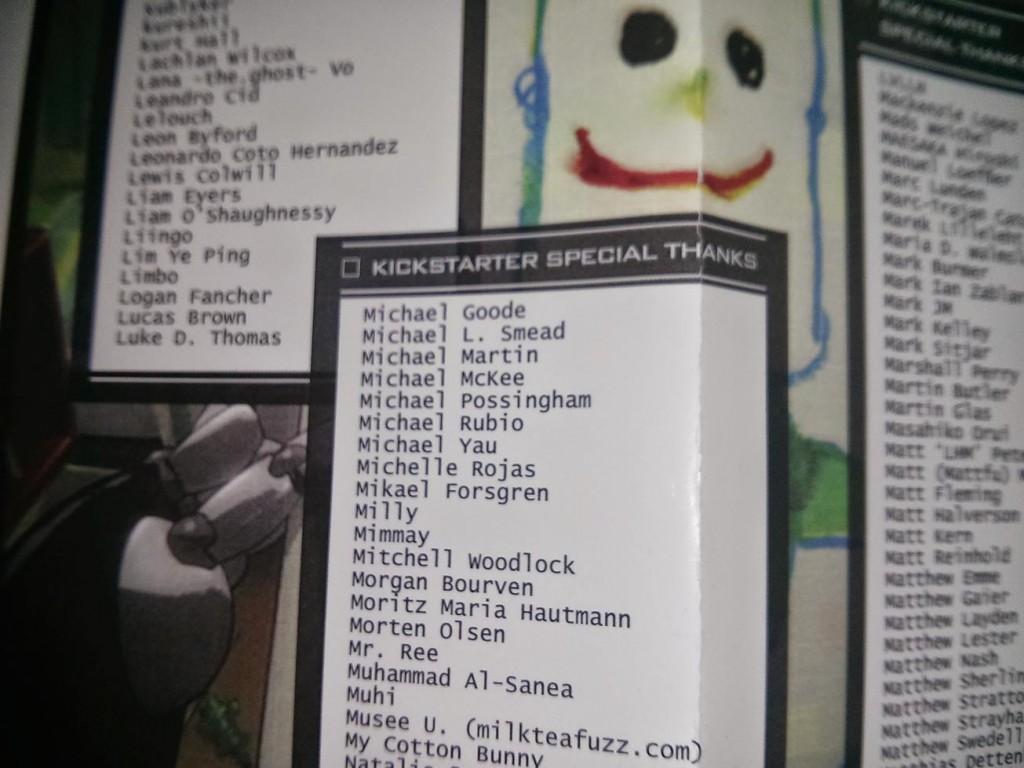 That’s right, through spending too much money I have forced everyone who backed this kickstarter to own a piece of paper with my name on it! Look forward to the Bubblegum Crisis blu-ray where I’ve used even more money to force everyone who backed it to own a blu-ray that shows my name on screen when they start it up. I think Kickstarter may be sending my ego out of control.

Let’s take a look at the book now 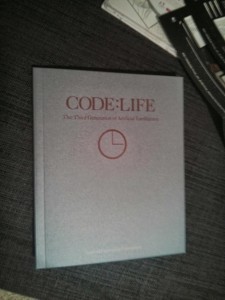 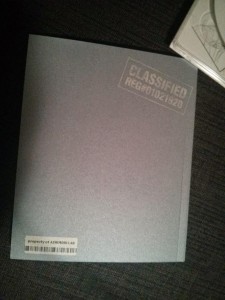 It’s kinda done up to look like a textbook, and the cover has this cool textured effect. 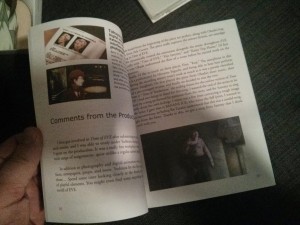 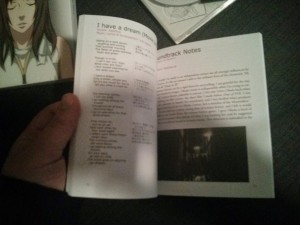 Inside there’s interviews and soundtrack lyrics and stuff. 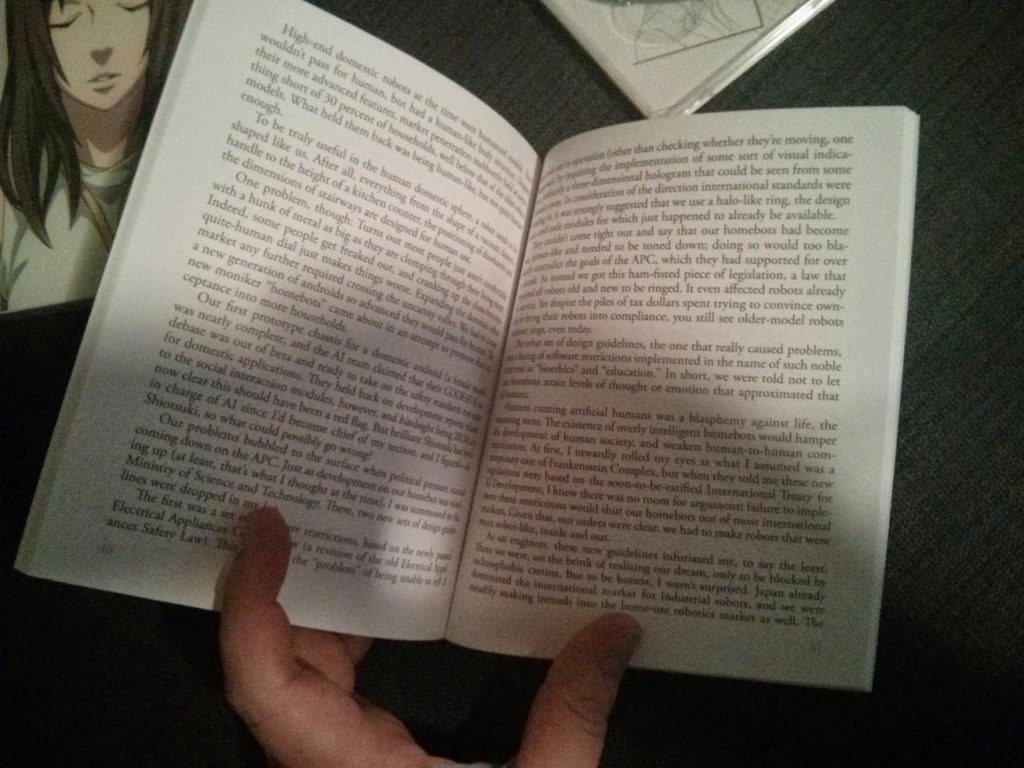 And also a short story!

One thing to note, for some reason my copy of the book seemed to have some of the pages out of order… I’ve already contacted the people running the kickstarter about it and they’re arranging for a replacement, so hopefully it should all be sorted out soon. Presumably it was just a one-off glitch that happened with my copy and not something widespread. At least it’s not as bad as the time I got the first volume of the Angelic Layer manga and found that a bunch of pages were totally missing. Anyway, all the content is there and I’ll hopefully have it all sorted eventually.

Also there’s the other thing that came with this set. 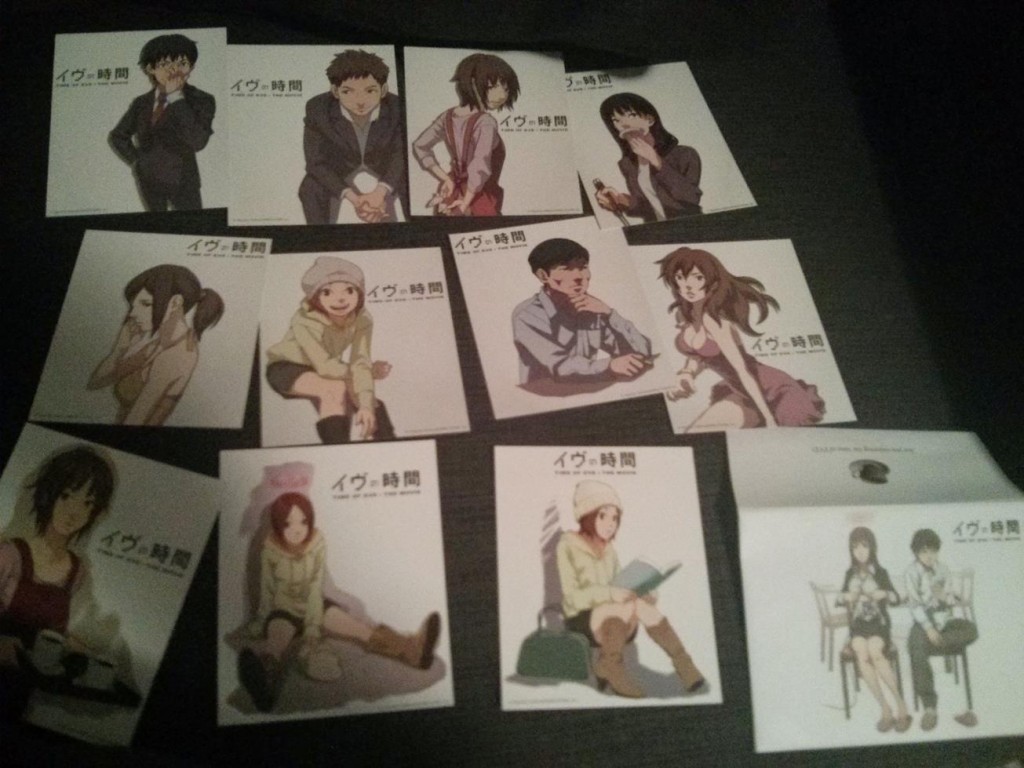 Loads and loads of character art cards, all in an envelope! 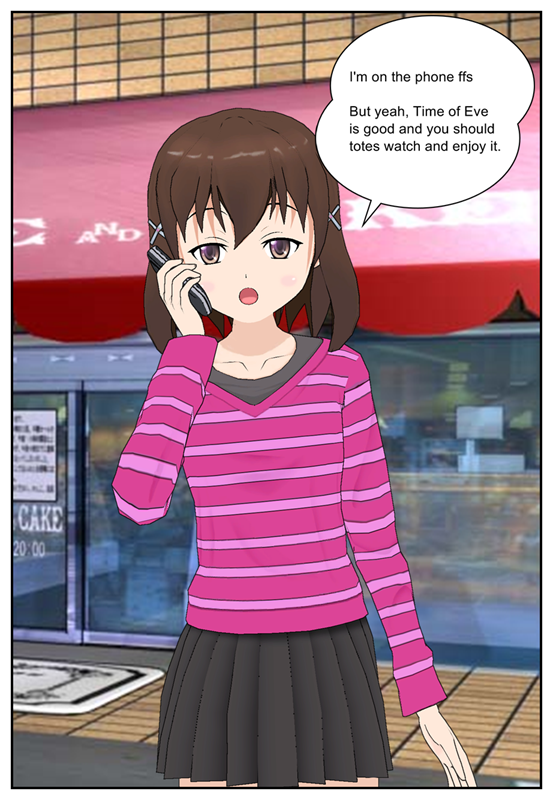 So you’ve heard it here, folks. Time of Eve is good and annoying fictional mascot characters while they’re on the phone is bad.

Seriously, this is a good anime.

The original ONA is still on Crunchyroll I think.

← Pharrell made a music video about his waifu
KIRYUIN SATSUKI: nendo version →