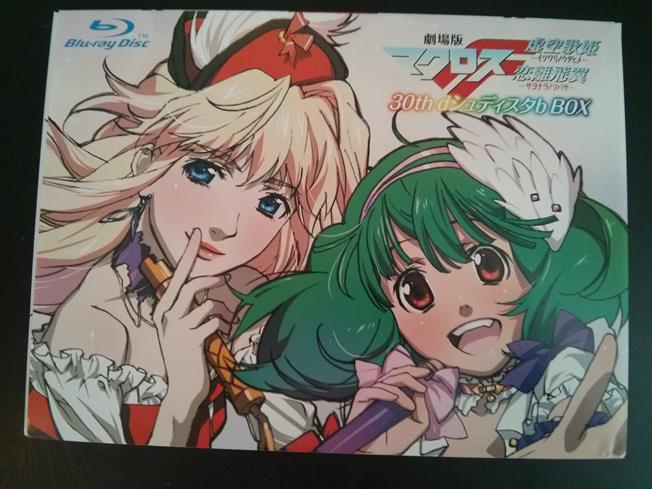 It finally arrived! My English subtitled Macross Frontier 30th Anniversary Blu-ray Movie set. Or to give it its full original title, “Macross Frontier The Movie 30th d Shooting Star b BOX”. No I don’t know why the title has a stray lowercase ‘d’ and ‘b’, but look they’re right there on the box art. Maybe they’re decorative? But in any case it’s Macross and it’s blu-rays and it’s actually got subtitles and I’m kinda excited.

What’s so exciting about a subtitled blu-ray, you may ask? Well aside from the whole “it’s a fancy box set with doodads” thing, the existence of the blu-ray and me having it in my possession is kinda exciting. To explain why, I may have to dive into the history of the Macross franchise.

In the mid-80s, a TV production company named Harmony Gold purchased the rights to three mecha anime series from Tatsunoko Productions in Japan: Super Dimension Fortress Macross, Super Dimension Cavalry Southern Cross, and Genesis Climber Mospeada. Using footage from all three series, they created Robotech, which nobody has cared about at all ever since the original series that comprised it got uncut subtitled releases.

Meanwhile, Macross was a big hit in Japan, and this led to sequels and movies and stuff. In the 90s, the sequels Macross II and Macross Plus were released outside Japan by Manga Entertainment, and those are still available. But meanwhile Harmony Gold had begun flexing legal muscle against importers of various Macross toys, asserting that they held the exclusive rights to the franchise (although to my knowledge Harmony Gold had never tried to flex any legal muscle against Manga’s releases). The problem began to become well-known when Macross Zero, the 20th anniversary prequel series, became a thing in Japan, and people started wondering about international releases. Because of Harmony Gold’s legal threats, no anime company could put it out without their approval, but Harmony Gold didn’t actually own Macross Zero as such.

Tatsunoko, who’d licensed Macross to Harmony Gold in the 80s, was only actually involved in the very first Macross series. The production company behind Macross, Big West, had brought them in to assist with animation when issues had befallen the studios working on the show (issues Tatsunoko solved by outsourcing production to shitty Korean studio AnimeFriend, who proceeded to produce some of the most awful off-model garbage animation I’ve ever seen, which kinda ruined some of the key episodes). Apparently this deal with Tatsunoko gave Tatsunoko the international licensing rights to Macross, along with various other rights, possibly. The reason I say ‘possibly’ is because there was actually a legal battle in Japan between Big West and Tatsunoko regarding what rights each company held to the series, and I’m not entirely clear on the outcome.

According to the FAQ on their recently-failed Kickstarter campaign to make more Robotech that nobody wanted, “…Harmony Gold licensed the exclusive rights to distribute Macross and its derivatives outside of Japan. The company has acquired these rights through all the official and legal channels in good faith, and we have protected these rights successfully for the last 30 years.” So Big West is making a whole bunch of sequels to Macross, but Harmony Gold is blocking their release based on rights they obtained from Tatsunoko. Confused yet?

Long story short: the guys what made Robotech won’t let any Macross sequels come out in English because of complicated legal reasons and sheer bloody-mindedness.

So yeah, after I wrote 500 words about how Harmony Gold are awful, let’s actually talk about this release. It’s a Japanese import, but it’s got English subtitles. This is a thing that happens occasionally (most of the Ghibli releases in Japan have subtitles and dubs in a million different languages), and it’s pretty cool when it does. I suspect in this case, with the international rights tied up in confusing golden harmonies, the japanese producers or distributors or whoever made this decision is trying to get some of that sweet sweet export money.

The actual thing in the box: the two movies based on the 2007 TV series Macross Frontier, which I watched as it was airing through *coughcoughahem*, and was basically the best thing ever. Hence my excitement at getting an official release of the films with decent English subtitles.

Anyway, let’s look at the packaging, since that’s kinda what I do. Front cover up the top, here’s what the back looks like. 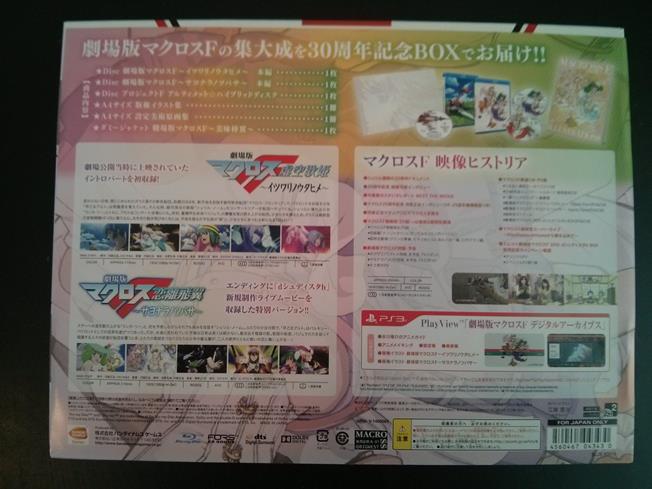 Note that the logo on the back of the box is Bandai Namco Games, and not Bandai Visual or something that’d make more sense for a home video release. Also note that there’s a PS3 logo. There are reasons for this. Also note the “FOR JAPAN ONLY” marking above the barcode. *coughcoughahem* Moving on.

Taking off the brightly coloured marketing blurb wraparound which I can’t read any of, we see… something a lot less interesting looking. 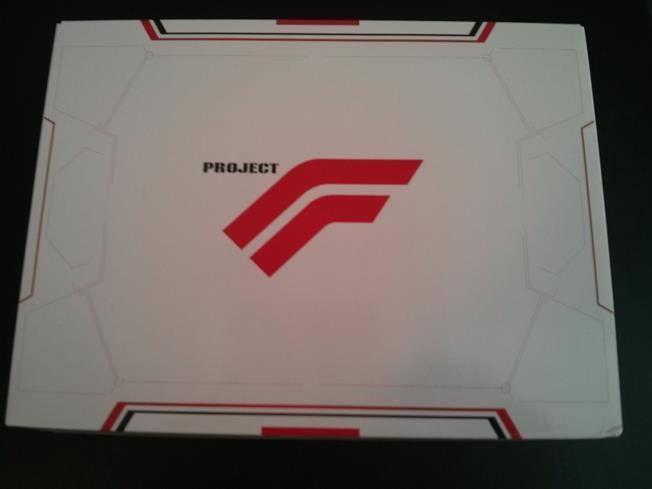 I guess it’s supposed to be stylish or minimalist or something… I dunno, it doesn’t do much for me to be honest. But anyway let’s open it up. 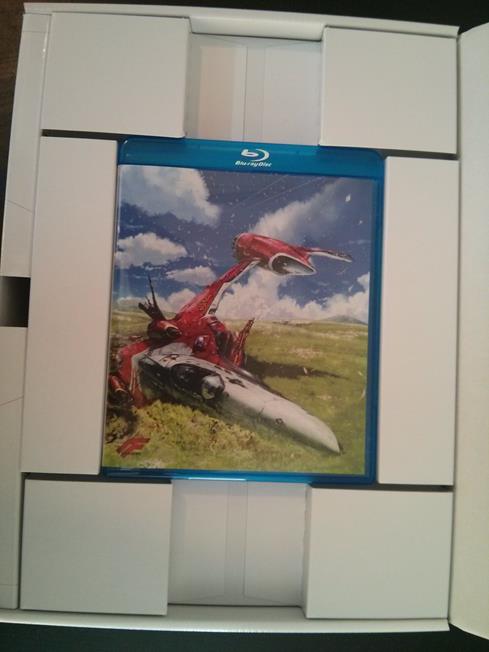 The first thing we see in the box is… the bonus disc for some reason. Not sure why this was on top, but it doesn’t actually matter. 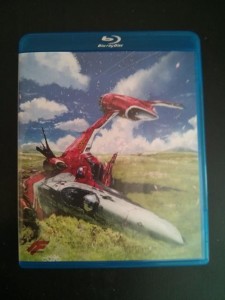 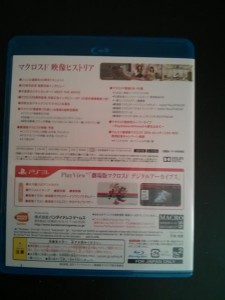 Here we see yet more references to PS3s, as well as some cool artwork of a Valkyrie and some stuff I can’t read. 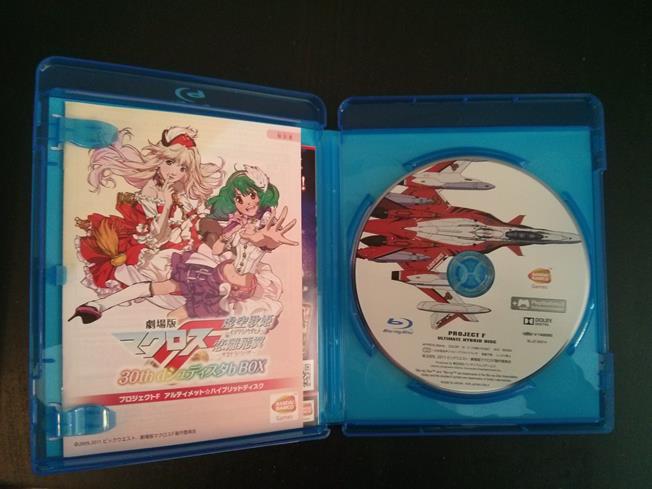 The reason behind all the PS3 references is that the bonus disc, while it works in a regular Blu-Ray player, also contains bonus PS3 stuff, which I haven’t tried that. And I guess that technically means this set is a video game rather than a Blu-Ray movie release, hence we’ve got all the Bandai Namco Games logos and a user manual.

Cool thing about the user manual is on the back. 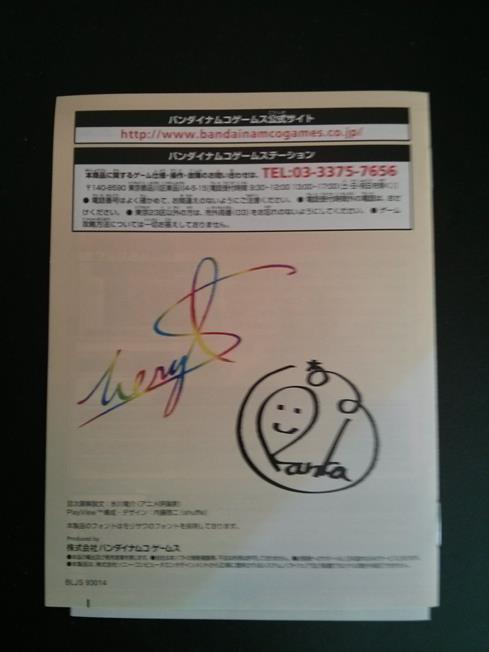 OH BOY IT’S SIGNED BY SHERYL AND RANKA except they’re just printed on and also they’re fictional characters and not real (or so everyone tells me). I dunno I thought that was a nice touch.

Anyway, let’s move down to the next layer of box stuff. 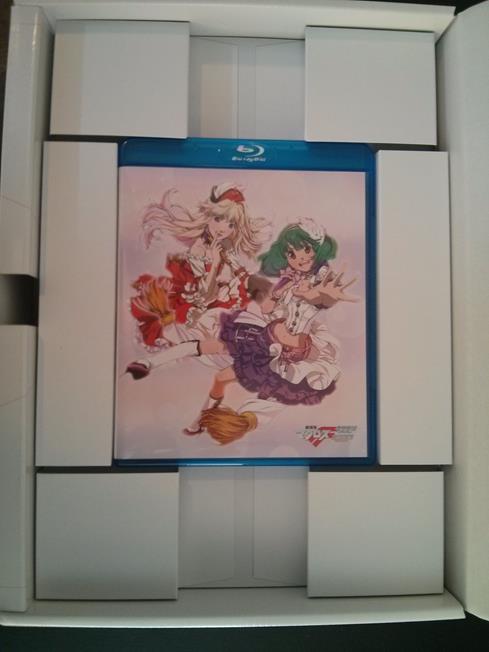 Next layer is the disc containing the films themselves! 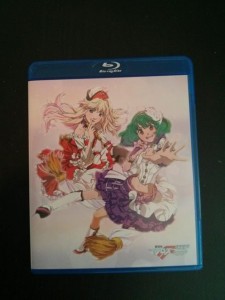 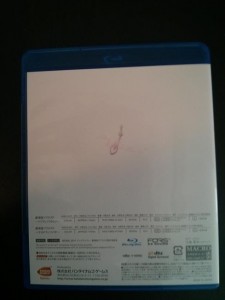 So this time we get cool artwork of Sheryl and Ranka on the front, along with a much more subdued back cover. 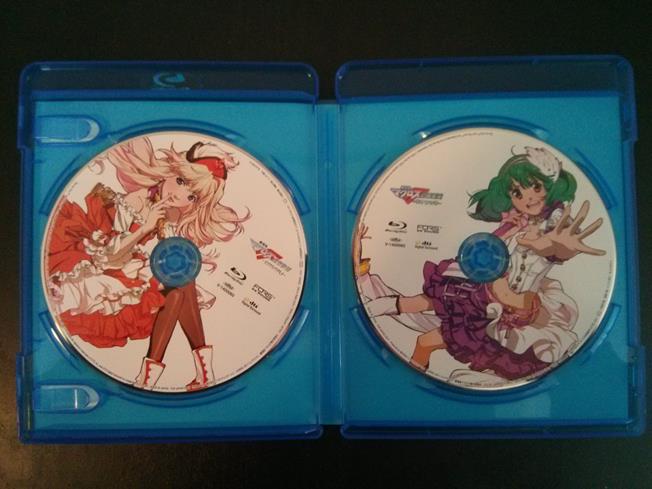 Two discs, one on each side, with Sheryl and Ranka pictures. Did you know this show also has male characters and planes that turn into mechs? Anyway these discs are amazing because SUBTITLES did I mention that? 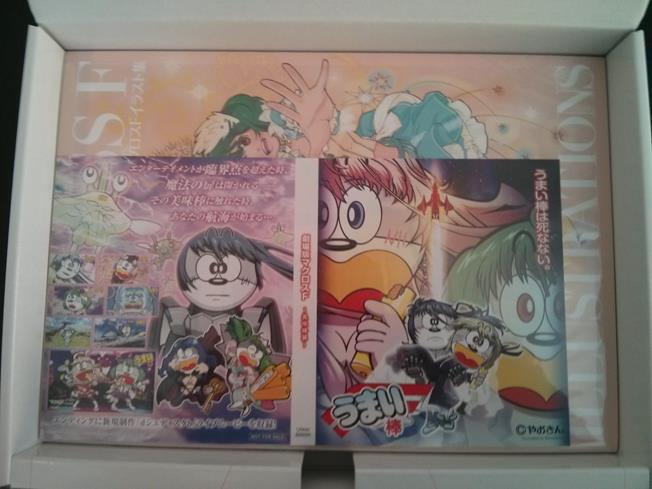 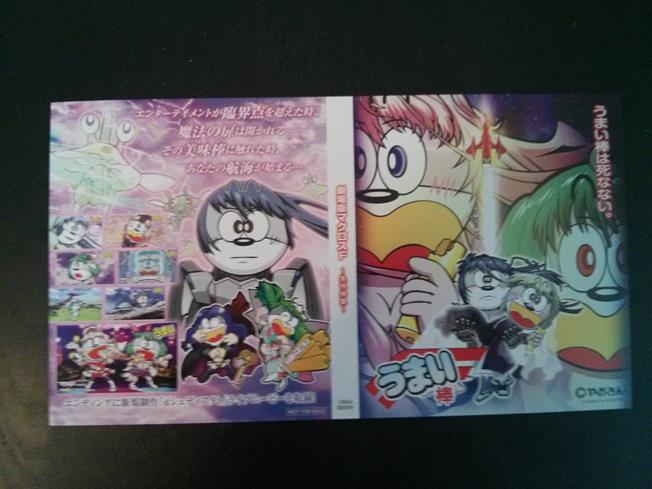 Alternate case artwork where they all look like what is apparently the mascot of some snack food? I don’t quite understand why this exists or who would use it. On the upside we see that this show actually has a male character I guess. 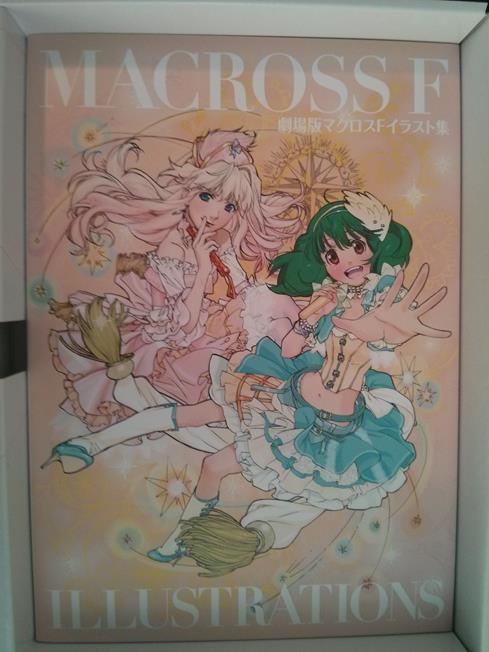 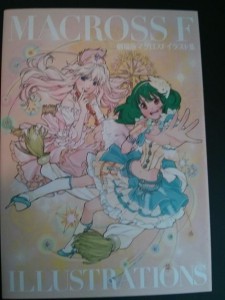 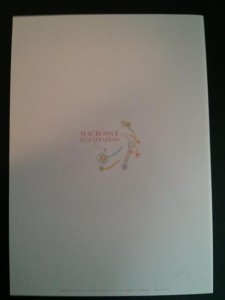 So yeah this is nice… it’s got loads and loads of full colour artwork. Let’s open it up and have a look. 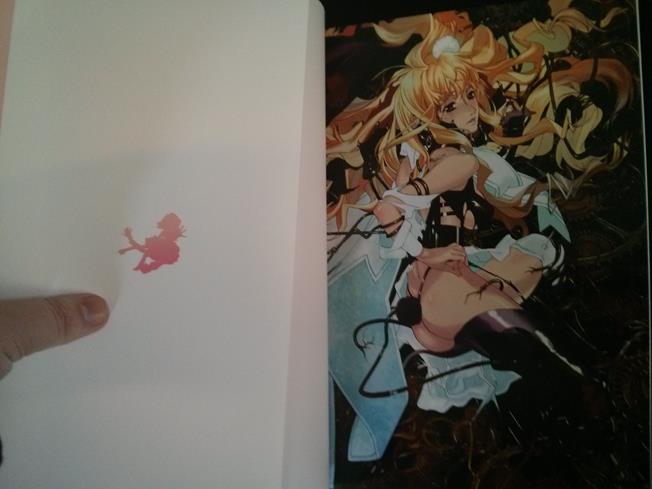 Note that it’s got a proper dust jacket, and on the first page we see… umm… let’s take a look at another page. 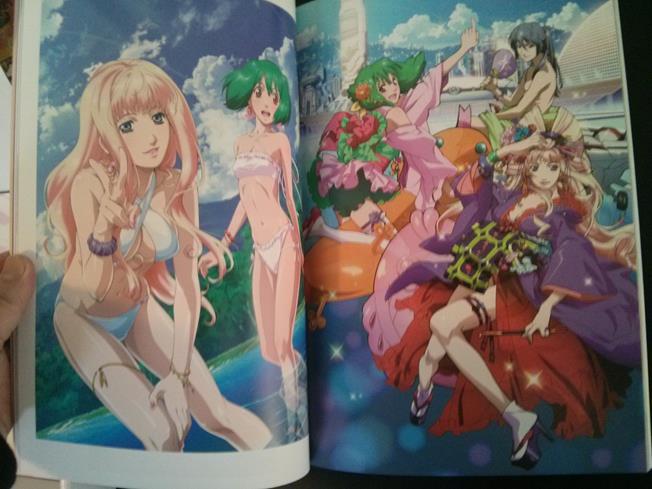 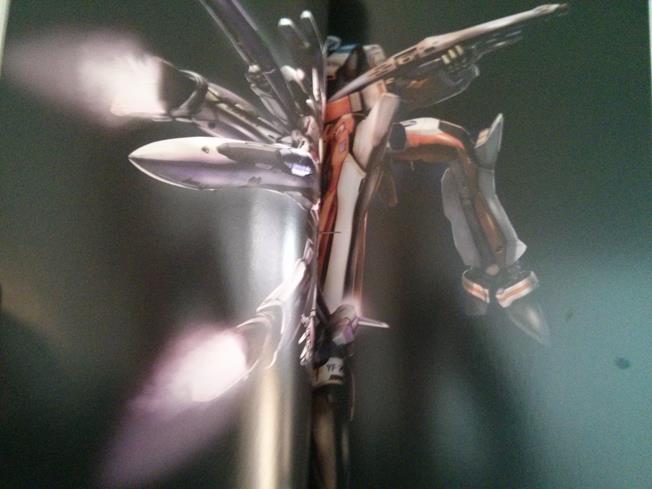 …pictures of awesome mechs! I.e. what this show is about.

I guess those previous pages at least fit with the vibe one would expect from a .moe domain.

Anyway, like I said this artbook has a dust jacket, so here’s what’s underneath it. 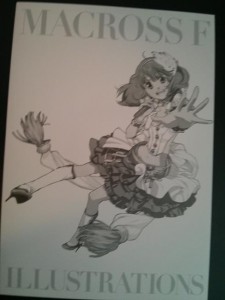 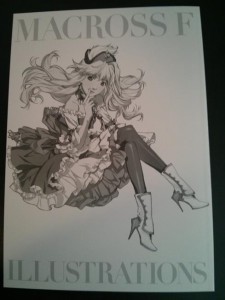 Oh thank christ it was just yet more reuse of that artwork and not something obscene. 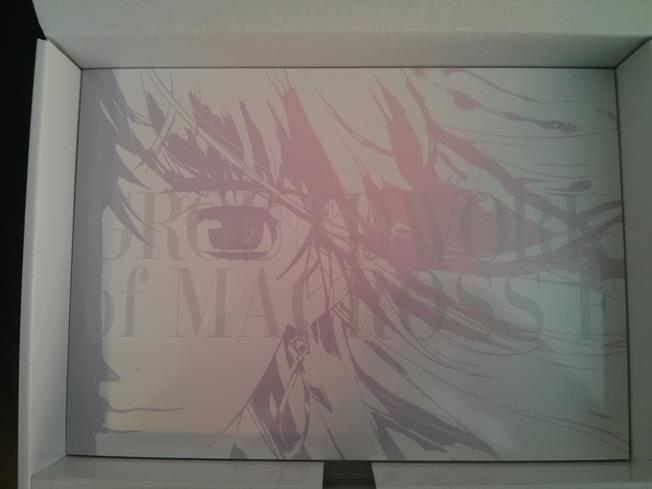 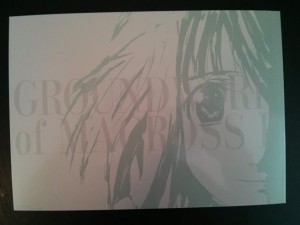 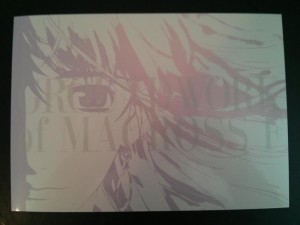 This one is kinda different and also interesting, because it’s got all the preproduction type artwork, like keyframes and character design sheets and whatnot. 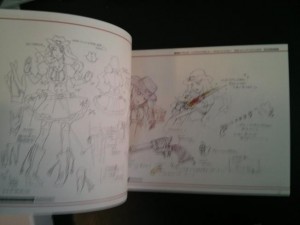 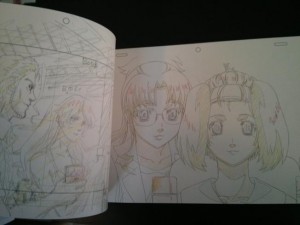 And of course stuff I can’t read. 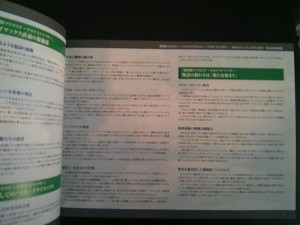 To be honest, this is a thing I am pretty excited about. Partially because they’re movies that I really want to see and they’re subtitled and everything, and partially because the artbooks and stuff are really nice, and mostly pictures so the stuff I can’t read isn’t a problem.

As for the actual discs, I’ve only watched the first movie so far, but I feel I should mention that some of the voice actors read the copyright warning message at the start of the disc in character.

So that’s the exciting new thing I just obtained, for the totally not high price of *coughcoughahem*.